Have It All Package Available for Purchase

*Promotion is subject to availability, may not be combinable with certain fares or other amenity offers, is capacity controlled and may be withdrawn at any time. Other restrictions apply.

READY TO PLAN YOUR SHORE EXCURSIONS?

As Asia’s premier gateway to China and Southeast Asia, Hong Kong offers a great travel experience. Visitors will find everything from hiking, horse racing and sailing to internationally renowned art galleries and lively art festivals. Some of the best hotels, dining and shopping in the world are found in this metropolis. Hong Kong is one of the world’s great cities and a delightful realm of natural wonders and serene rural villages. With its wealth of cultural attractions, Hong Kong invites exploration and inspires interest to even the most experienced traveler. Sights include Museum of History – which houses a collection of archaeological finds and historic photographs providing an introduction to Hong Kong’s history. Cultural Center is the city’s newest performing arts venue. The Space Museum’s dome, where Omnimax shows and astronomy exhibits are featured, is nearby. Adjacent is the Museum of Art. Stanley Market is an open-air market for browsing and finding bargains in fashions, leather, porcelain, and linens. Jade Market is a specialty market featuring 450 stalls with jade items.

Shanghai is a teeming metropolis of 11 million, bustling with energy, towering skyscrapers, art deco buildings, honking traffic, and shopping crowds. Once here, visitors will find Eastern ways abound: Tai Chi along the Bund, the serenity of exquisite ponds and gardens, and an endless flotilla of sampans edging along the Huangpu River. Explore Shanghai old and new: the busy bazaars and alleyways of the Old Town, Yu Garden, Wuxingting Tea House, Long Hua Temple and more.

Shanghai is a teeming metropolis of 11 million, bustling with energy, towering skyscrapers, art deco buildings, honking traffic, and shopping crowds. Once here, visitors will find Eastern ways abound: Tai Chi along the Bund, the serenity of exquisite ponds and gardens, and an endless flotilla of sampans edging along the Huangpu River. Explore Shanghai old and new: the busy bazaars and alleyways of the Old Town, Yu Garden, Wuxingting Tea House, Long Hua Temple and more.

Kagoshima, a seaport on Kyushu Island, Japan, is sheltered within Kagoshima Bay and is the commercial and cultural center of southern Kyushu. Products manufactured here include a famous type of earthenware known as Satsumaware. Sights of interest include the Iso Garden and the local Theatre.

One of Japan's most historic cities, Nagasaki was a major port, trading with the Portuguese and Dutch in the 16th century. You can still see this colonial legacy in the brick buildings, old forts, canals and curving cobblestone streets. On a hill overlooking the bay, beautiful Glover Mansion, the setting of Madame Butterfly, is typical of the fine homes built by wealthy foreign residents. But Nagasaki's ties with Korea and China are equally apparent in the famous Chinese temple, a large Chinese colony and the numerous fine Korean and Chinese restaurants.

Korea's "museum without walls" is akin only to China in its depth and cultural wonder. From Pusan, you can journey to the ancient Silla capital of Kyongju, a dynasty which reigned in Korea for almost a thousand years. Today this small provincial town is virtually a museum without walls, dotted with many splendid ruins. Nearby, the forested mountains and valleys shelter hundreds of beautiful Buddhist shrines including the renowned Sokkuram Grotto, and Tongdosa and Pulguksa Temples. Pusan is also a shopper's mecca and Korea's vital southern link to Japanese and American trade.

Hakata is a port city that merged with Fukuoka city, and is now one of the largest cities in the northern part of Japan. There is a fantastic shopping and entertainment complex on the water at Hakata Wharf . Inside the building there is a beautiful aquarium, which contains about 500 fish from the local sea. There is also a museum, a year-round indoor snowboard facility, and the Hakata Port Tower. The wharf is also the boarding point for many sightseeing cruises and passenger ferries. And if that were not enough there is also Canal City Hakata, where the canal has been turned into a nature garden, with plants, live fish and even fireflies. The complex contains two hotels, office space, a movie theater with 13 screens, a Sega amusement park, a theater for musicals and plays, and a variety of shopping and dining.

Himeji is best know for it's famous feudal castle, which is both a National Treasure and a UNESCO World Heritage Site. It is virtually the last castle in Japan that still manages to tower over the surrounding skyscrapers and office buildings. Visitors can also visit the Kokoen Gardens, a magnificent collection of nine Edo-period-style walled gardens on a site where samurai houses once stood.  Additionally, the streets in the area surrounding Himeji Station are filled with shopping arcades and the usual department stores, such as Festa and Miyuki Dori.

This large, bustling port is the starting point for tours to the ancient cities of Kyoto and Nara, the cultural fountainheads of classical Japan. Kyoto's Old Imperial Palace and the shogunal Nijo Castle remain glorious symbols of the power the city held for over 1,000 years. Until 1868, Kyoto was the capital of Japan, filled with elegant timber buildings and, perhaps more than any other Japanese city, imbued with Kami, the divine spirit. You'll sense it everywhere, for there are hundreds of Shinto shrines and over a thousand Buddhist temples, as well as sacred treasure-houses of religious sculpture, painting and exquisite gardens. Nara, City of the Seven Great Temples, lies in an idyllic setting.

Shimizu is located on the northwest coast of Suruga Bay on the island of Honshu. Protected by a sandspit, it is a major commercial port and fishing centre. Places of scenic and historic interest include the Pine Groves of Miho, the Ryuge Temple, containing a fern palm believed to be more than 1,000 years old, and the nearby Nippon-Daira plateau.

Yokohama is located on the southern part of Honshu Island, on the western shore of Tokyo Bay, and is our gateway to Tokyo. It has excellent harbour facilities and is one of the leading ports industrial centres of Japan. There are numerous shrines, temples, and Christian churches and a number of beautiful parks. A small fishing village in 1854, Yokohama was almost totally destroyed in 1923 by an earthquake. Gradually reconstructed the city is now among the most modern in Japan. It was heavily bombed in 1945, during World War II. 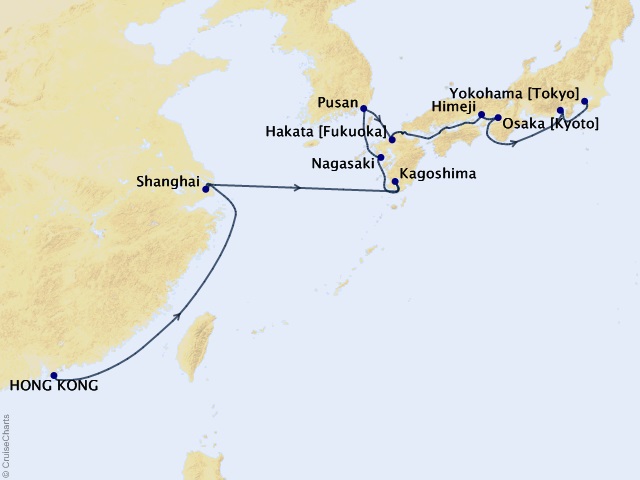 Rates are cruise only, per person, based on double occupancy. Taxes, Fees and Port Expenses of $230 additional for all guests. Fuel surcharges may apply. Please ask your travel counselor for details. Rates are subject to availability and may change without notice. Restrictions may apply.

Prices are per person, based on double occupancy. Airfare, transfers, Taxes, Fees and Port Expenses additional.

All fares are quoted in US Dollars.

All prices per person and in USD unless otherwise stated.
Offer ID:
1413206