*Promotion is subject to availability, may not be combinable with certain fares or other amenity offers, is capacity controlled and may be withdrawn at any time. Other restrictions apply.

Known as the "Happy Isles," the Solomons are one of the best-kept secrets in the Pacific. These are islands of great natural beauty from jungle-clad peaks and active volcanoes to dashing waterfalls, misty rainforests, turquoise lagoons, and brilliant coral reefs. The islands' variety of cultures and customs is also striking. In Honiara, backstreet quonset huts and an occasional, rusty wreckage provide grim reminders of World War II; over 25,000 Japanese and American soldiers were killed or wounded on Guadalcanal. Honiara has been the capital of the Solomon Islands since Tulagi was devastated during World War II.

Rabaul and it's Harbor is to the New Guinea islands as the Metro is to Paris. Tokua airport is the gateway to the islands region. Rabaul is surrounded by friendly native villages and the local dialect is called Kuanua and its people are called Tolai's.

Madang is a port on the northeastern coast of New Guinea lying on Astrolabe Bay near the mouth of the Gogol River. It is the centre for a large timber industry based on the Gogol forest about 25 miles (40 km) inland. Nearby is an island studded lagoon, coral reefs and a rainforest with fruit bats. Abandoned by the Germans in 1899 because of the prevalence of malaria, it was occupied by the Japanese from 1942 to 1945. Kalibobo lighthouse at the harbour entrance commemorates the New Guinea coast watchers who aided the Allies during WW2.

Tami Island
10/28/2022
10/28/2022
Located off of the southeast coast of Papua New Guinea’s Huon Peninsula, the Tami Islands consist of a group of four coral atolls.  The indigenous inhabitants of the islands are famous for their bowls, figurines and ceremonial masks; all elaborately carved out of wood.  Reefs surrounding the islands contain a stunning array of marine life such as Blue Sea Stars, jellyfish and many schools of various fish species.   With their sandy white beaches, top notch snorkeling spots and friendly islanders, the Tami Islands are an excellent choice for a vacation from urban life.
Tufi
10/29/2022
10/29/2022
Located on a tropical fjord of Cape Nelson, Papua New Guinea.  With around 30 different dive sites, teeming with coral and schools of fish, Tufi is an extremely popular destination for divers and snorkelers alike.  Not only will divers admire the diverse marine life, but they can also experience the thrill of searching for various World War II wreckages.   Some visitors may want to explore the surrounding areas topside by canoe, kayak or on a trekking expedition.  It is here that they will discover stunning waterfalls cascading from the highest cliffs, secluded beaches as well as a plethora of tropical bird species that call Tufi home.
Samarai Island
10/30/2022
10/30/2022

Samarai Island is located in the China Strait located in Milne Bay, the easternmost inlet on the coast of Papua New Guinea, and gives good access to coral reefs and diving. The Bay has plantations on its south and west shores while the north shore is steep and rugged.

Cairns is the sunny garden city where the Great Barrier Reef meets the Wet Tropics Rainforest, mountains and the gulf savannah not too far away. The city's water front boasts a world class marina and wharf used by visiting cruise liners, yachts and tour vessels. Cairns is situated in the Northern end of Tropical Queensland Australia. It's a modern city with a good location to explore some of Australia's vast array of flora and fauna. With a magnificent Casino, Cairns is alive with more activities than a visitor will ever have time for. The principal attraction is the over 60 national parks from the wet tropical rain forests and lush tablelands to the truly wild Cape York Peninsula and the Great Barrier Reef. 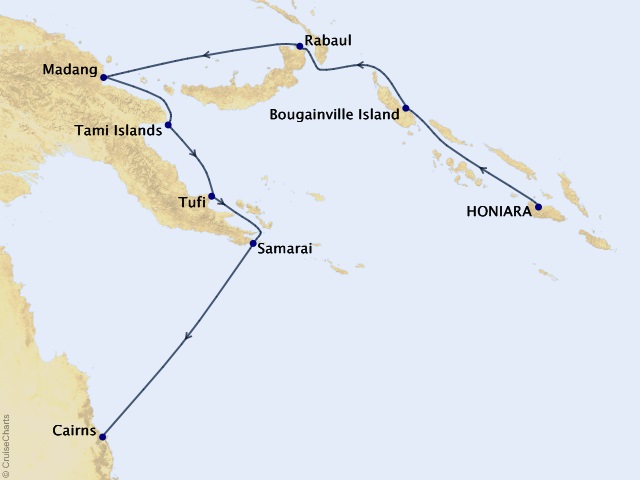 Cruise, meals, and more... including:

Remarks:
Fares listed are per person, based on double occupancy, unless otherwise noted.

All fares are quoted in US Dollars.

All prices per person and in USD unless otherwise stated.
Offer ID:
1421585