READY TO PLAN YOUR SHORE EXCURSIONS?

Piraeus is the seaport for Athens, the capital of western civilization, which boasts a fantastic mix of classical ruins and vivacious modern life. Climb the hill of Acropolis to wonder at the Parthenon, join the lively Athenians in Constitution Square, and find a welcoming taverna for spirited bizouki music, plenty of ouzo to drink, and energetic Greek dancing. Piraeus is the largest harbor in the country. The white chapel of St. George at its summit has a theater bearing the same name. The hill of Nymphs is the site of a planetarium, which is located above magnificent Thesseio temple. Among all of these hills, Acropolis is the one that glorified Athens and the whole Greek world and became the symbol of the western civilization. Bays and small rocky or sandy coves dot the area and during the summer are filled with Athenians and foreigners enjoying their beauty.

Athens at a Glance - 3 hours

Athens - The Athenian Riviera & the Temple of Poseidon - 4 hours

Agios Nikolaos lies picturesquely on Mirabello Bay in the eastern part of Crete. Its charming small town has developed into a popular holiday resort thanks to its beautiful beaches and its convenience as a center from which to explore eastern Crete. Visit the island's capital, Heraklion, and the famous site of Knossos. Many of the artifacts and frescoes unearthed at Knossos are now in Heraklion's renowned museum. Among the artists who came from this port city was El Greco, who was born near Heraklion in 1541. The area around the harbor and the side streets are lined with souvenir and handicraft shops. Tavernas along the harbor front offer tasty local dishes. Spinalonga Island is located 15 miles from Ághios Nikólaos. Formerly the site of a leper colony, the island is popular with sun worshippers who enjoy its picturesque setting. Other attractions include the remains of a 16th-century Venetian fort.

This sun-drenched Mediterranean town on the Turkish Riviera is a major resort with a beautiful crescent bay, dramatic cliffs, and jagged mountains. It is an attractive city with shady palm-lined boulevards and a prize-winning marina. In picturesque old quarter, narrow streets and old wooden houses huddle against ancient city walls. Antalya's visitors come see the old town with its picturesque harbor and excellent Archaeological Museum. Its outstanding exhibits provide fascinating glimpses into the life of the region. In the surrounding area are additional attractions such as Aspendos, Perge and Side. Their remains of antiquity are considered among the most impressive sites. Visit Hadrian's Gate and Main Square, which with its landmark clock tower offers views of the bay and distant mountain peaks. Karatay Medrese (Theological College) exemplifies the best of Seljuk stone carving. Ataturk Museum features a collection of interesting memorabilia commemorating the founder of Turkey.

Antalya: The Greco-Roman Heritage of Antalya, Perge & Side - 7 hours

Every night people celebrate events momentous and trivial. Explore Limassol Castle, which contains the Cyprus Medieval Museum, or the Folk Art Museum, housed in an old mansion. Walk ten miles of beautiful beaches, known as Cypriot Riviera. Stroll in the sea promenade or visit lush Municipal Gardens. On the coastal road to the east, just after luxurious hotels, you will find Amathus, one of the ancient city kingdoms of Cyprus. See the ruins and take a dip near the site of an ancient port. West of Limassol lies Kolossi Castle, a medieval fortress whose walls contain a tower surrounding living quarters, and an ancient sugar factory. Visit the Kourion archaeological site, an ancient city-kingdom, where you can take in a play or concert at the ancient Greco-Roman Theater, overlooking the blue Mediterranean. And explore a treasure trove of Greek and Roman sites, such as the Sanctuary of Apollo.

Rhodes is one of Greece’s favored vacation centers and was an important cultural center with a well-known School of Rhetoric attended by such greats as Cicero and Caesar. Rhodes' most famous attractions originated with the Knights of St. John, who occupied parts of the island from 1310 to 1522 and left a medieval town, dominated by the Palace of the Grand Masters and Knights' Hospital, which houses an Archaeological Museum with interesting exhibits of national archaeological finds. Rhodes has inspired many artists. The Old Town offers shopping opportunities and lively nightlife. At Mount Filerimos a church has been built on the site of an ancient temple. A popular excursion is to the charming village of Lindos. Its premier attraction, the ancient acropolis, stands atop sheer cliffs. Walls of a 13th-century Crusader castle enclose the site. Today, the winding path up to the acropolis is lined by stalls, where locals sell lace tablecloths and souvenirs. Mandraki Harbor's entrance is flanked by stone columns topped by figures of a stag and a hind, the town's heraldic animals.

Visitors come to Kusadasi for beaches and nearby ruins of Ephesus. The major attraction is the archaeological site of ancient Ephesus, considered to be most important in Turkey. The history of this ancient city dates back to 10th century BC; many remarkable structures seen today are result of an excavation and restoration program. Along a white marble road grooved by ancient chariot wheels, the two-story Library of Celsus presents a striking sight. There are temples, houses of noblemen, and community buildings lining ancient streets. Nestled in the mountainside is a 25,000-seat amphitheater, still used for performances during Festival of Culture and Art. Bible buffs may know Ephesus as inspiration for St. Paul’s Epistle to Ephesians and the site of one of the first seven churches of Asia Minor. Treasures are kept in the Seljuk Archaeological Museum. Among the better-known ancient sites near Kusadasi are ancient Miletus and Dydima. Remains include a well-preserved Roman theater at Miletus and Dydima's sacred temple of Apollo.

Kusadasi Port - A Taste of Ephesus- (Half day tour)

Kusadasi: The Greco-Roman City of Ephesus & the Wine-making Village of Sirince - 7 hours

The Dardanelles, formerly known as the Hellespont, is a narrow strait in northwestern Turkey connecting the Aegean Sea to the Sea of Marmara.

The Bosphorus is the strait flowing between the Sea of Marmara and the Black Sea.

Cosmopolitan Odessa is an area thriving with beaches, special saline baths and mild climate. This city continues as a major cultural center, and Odessa’s citizens are proud of their heritage and culture stemming from a multiethnic mix including Ottoman Turks, Greeks, Bulgarians and Jews. Under Catherine the Great, Odessa became capital of New Russia. In recognition of the inhabitants’ valiant stand in World War II, Odessa was proclaimed the Hero City. Many 19th century French-style buildings reminiscent of St. Petersburg survived, adding greatly to the city’s numerous attractions, including Vorontsov Palace, the remains of the Turks' fortress Enu Dunia, and the former Stock Exchange. The pride and glory is the neo-classical Opera House that saw musical events conducted by Tchaikovsky and Anna Pavlova ballets. Thanks to temperate climate and prime beaches, Odessa and its surrounding resort areas attract scores of visitors who are pampered in seaside spas and visit opulent palaces, or engage interested residents in a conversation to learn about the dissolution of the Soviet Union.

Romania's second largest city, Constanta attracts by the harmony between ebulient business world and intense cultural life.
Developed upon the ancient ruins of the Greek stronghold Tomis, Constanta has always been a centre of ethnic and spiritual diversity, a pole of economic exchanges in the Black Sea region and in South-Eastern Europe

Romania's second largest city, Constanta attracts by the harmony between ebulient business world and intense cultural life.
Developed upon the ancient ruins of the Greek stronghold Tomis, Constanta has always been a centre of ethnic and spiritual diversity, a pole of economic exchanges in the Black Sea region and in South-Eastern Europe

Today, residents of Nessebur (Nessebar) live mostly from fishing and tourism. Nessebur sits on a small rocky peninsula connected to the mainland by a narrow isthmus. Remnants of the 2nd century city walls rise above the town and the winding, cobblestone streets are lined with stone and timber houses with wooden stairways and jutting first floors. Another characteristic of Nessebur architecture are horizontal strips of white stone and red brick offset by striped blind arches resting on vertical pilasters, the facades highlighted by ceramic discs and rosettes. Other sights include the Museum of Archaeology - a new museum housing a fascinating collection of some 5,000 relics and finds that have been salvaged from archaeological sites of the ancient town of Nessebur.

This centuries old capital guards the slender waterway between the Mediterranean and the Black Sea, and is the doorway between the East and West. Visitors can explore remnants of Byzantine Constantinople in the Sultanahmet district, where you will have the chance to see ancient splendors, such as the Haghia Sophia, the Blue Mosque and Topkapi Palace. At night the city boast a lively nightclub scene and excellent Turkish dining options that may include cultural entertainment and dancing. Istanbul also features splendid shopping malls, boutiques, and hand crafted items can be found all over the city.

Istanbul: The 16th Century Masterpieces of Sinan the Architect - 7 hours

Istanbul - At Your Leisure Tour - 8 Hours (Provided by Travelive)

This centuries old capital guards the slender waterway between the Mediterranean and the Black Sea, and is the doorway between the East and West. Visitors can explore remnants of Byzantine Constantinople in the Sultanahmet district, where you will have the chance to see ancient splendors, such as the Haghia Sophia, the Blue Mosque and Topkapi Palace. At night the city boast a lively nightclub scene and excellent Turkish dining options that may include cultural entertainment and dancing. Istanbul also features splendid shopping malls, boutiques, and hand crafted items can be found all over the city.

Istanbul: The 16th Century Masterpieces of Sinan the Architect - 7 hours

Istanbul - At Your Leisure Tour - 8 Hours (Provided by Travelive) 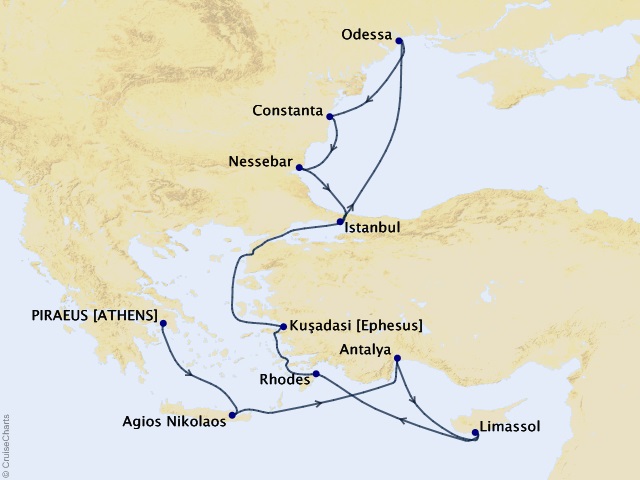 Fares are in US dollars, cruise only, per person, based on double occupancy and include fees/taxes. Price does not include airfare, transfers and airline government fees and taxes.

Remarks:
All fares and offers are for new bookings only, are capacity controlled and subject to availability, may not be combined with other offers and may be withdrawn at any time without prior notice. Fares are in US dollars, cruise only, per person, based on do

All prices per person and in USD unless otherwise stated.
Offer ID:
1436207